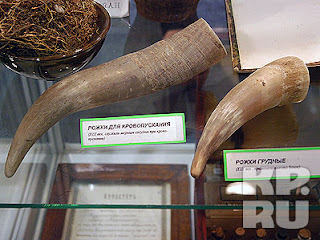 He, who in the early spring,
when the trees are not yet dressed in leaves,
goes in the forest  at dawn
and using fragments of bone
release some blood from a vein,
he will live to be a hundred years old.
People's folk tail belief

Bloodletting procedure has long served as a medical purpose. Ancient Talmudic, for example, recommended to open the blood every month to increase vitality. The same advise the ancient Hindus. Proponents of this method of treatment were Avicenna and Hippocrates. In Russia, there were a whole dynasty Bloodletters; sometimes they become barbers. In the villages, there is a tradition to this day: the dying craftsman-Bloodletter must transfer their knowledge to a successor.
Each area of Russia had their own tradition of this transfer: somewhere it is enough to touch the hands of a successor, somewhere had to give him a glass of vodka. The gift of Bloodletting was supposed to transfer to one of the family members. From generation to generation this art was passed on family grounds. In some areas, the custom was not so strict - bloodletters were allowed to transfer their skills to a friend or neighbor and in some places the Bloodletter were not allowed to treat family.
Blood stagnation caused rheumatism, headaches, gout, skin and mental diseases. Masses from the Russian villages considered the cause of these illnesses blood contamination, and, according to their views, the disease provoked the so-called Waste of blood. It was believed that mostly young people and children possess copious amounts of unspent blood, so they performed bloodletting on them.
It was forbidden to "open" the blood of the elderly because of the weakening of their body. But there are no rules without exceptions. In general, there was a specialization: anyone treating internal diseases, some skin, some mental were allowed to do that. The procedure followed its timing to the last quarter of the lunar month. Bloodletting practices had to be able to accurately determine exactly where to reduce the blood. For example, "In cases of insanity, blood should be bled from one foot and put compresses on the neck during the day" (from a medical book of XVIII century).
We worked a small knife, made ​​specifically for this purpose, a sharp fragment of bone and a razor; Bloodletters in Tuva have used an iron rod of 14 centimeters in length. Bloodletting was conducted from the elbow vein and the veins of the back of the foot, as well as the side of the neck.
In the second half of the XIX century, this method was losing popularity due to the development of Microbiology and Virology. For example, the founder of field surgery NI Pirogov, recognizing the objective value of the bloodletting method, pointed out that it is not effective in diseases of the bowel, as it is not capable in extreme situations to ease the irritation of the peritoneum.
The great physiologist IP Pavlov believed this method to be heavy to the body. The interest in the bloodletting resurfaced again in the 40s. In animal experiments, scientists and doctors VN Shamov and AN Filatov found that the total resistance is increased as a result if letting even only a drop of blood. How can we explain such an effect? The body repairs itself by developing a new (in modern terms un-stagnant) blood. Researchers have also found that donors who have had "open" blood, less become less affected and infected than all the others, suffer less from flu and colds.
Later it was discovered that the immune effects have neuropeptides - hormone-like substances found in various tissues of the body. In time, they become more active users of blood, and viruses and bacteria start to lurk. It turns out that even a simple blood test is helpful ...
When ere special Folk medical recipes; some of them are applicable today to stop all sorts of bleeding: - 1 tablespoon yarrow pour a glass of boiling water and simmer on low heat for 15-20 minutes, then strain; used as a hemostatic agent in the form of lotions for 20 min - 2 tablespoons dried nettle brew, cool and drain; drink half a cup 2 times a day - morning and night; - 2 tsp coarsely powdered root burnet drug pour a glass of water, bring to a boil and simmer for 15 minutes. Pour boiling water to the original volume, cool and drain. Take several times a day immediately before the meal.
Share Share on Facebook Tweet Tweet on Twitter Pin it Pin on Pinterest